Research focus is the formation of gas vesicles in the halophilic archaeon Halobacterium salinarum. Major constituent is GvpA forming ribs that are stabilized by GvpC attached to the outer surface. Ten accessory Gvp proteins are involved in the initiation of gas vesicle formation that are characterized in further detail.

Formation of Gas Vesicles in Haloarchaea 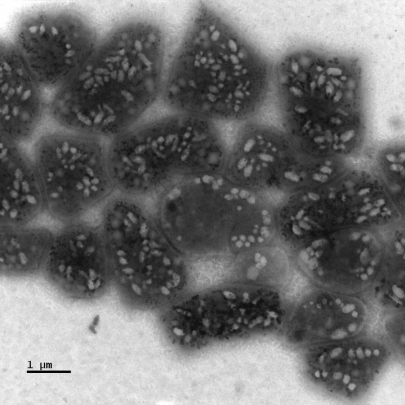 The expression of the gvp genes is regulated at the transcriptional and posttranscriptional level. Four promoters are involved, two of which depend on the transcriptional activator GvpE that resembles a leucine-zipper protein. The DNA region required for gene activation by GvpE are characterized. In addition, the regulation of expression occurs at the level of translation. Three of the four transcripts contain a 5’-untranslated region (5’-UTR). The presence of these 5’-UTR reduces the expression, and leaderless transcripts are translated with 3 to 15-fold higher rates. The 5’-UTRs are between 20 to 160 nt long and form secondary structures that influence the expression. We characterize these sequences to gain further information on their role in gene expression. In addition, a small open reading frame encoding a 21-aa peptide is found in 5’-UTRD, and the role of this putative peptide in gene regulation or in the formation of the gas vesicle structure is addressed.

Use of synthetic riboswitches in Haloarchaea

Riboswitches in the 5’-UTR of transcripts are used regulate the start of translation upon the addition of a ligand. The riboswitch forms a secondary structure masking the ribosomal binding sequence and the AUG start codon of the gene under control. Binding of the ligand to the aptamer unfolds the secondary structure and leads to the translation of the mRNA. A bacterial riboswitch depending on theophylline was able to switch in the halophilic archaeon Haloferax volcanii, and lead to the translation depending on the theophylline concentration.

Funding is provided by