The goal of our research is to elucidate the cellular and molecular mechanisms that regulate the patterning and differentiation of ocular tissues, specifically the neural retina and retinal pigmentepithelium.

Regulation of Early Eye Development in the Developing Chick Embryo 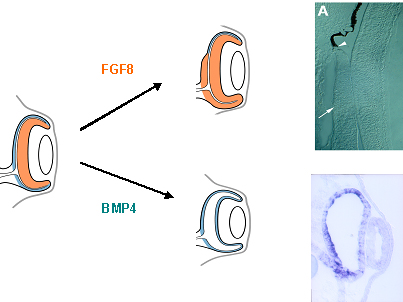 Vertebrate eye development is initiated through the evagination of the optic vesicle of the forebrain. These neuroepithelial cells of the optic vesicle are initially indistinguishable, coexpressing a number of transcription factors and these cells are competent to develop into the multilayered neural retina (NR), the single-layered retinal pigment epithelium (RPE) and optic stalk. The development of the eye is the result of a complex, reciprocal interaction between several tissues.

Extrinsic signals released from the surrounding tissues appear to induce and repress specific transcription factors which eventually subdivide the optic vesicle into a NR and RPE domain. In order to identify signaling molecules and to characterize their in vivo role we use a combination of molecular, cellular and embryological approaches. Using the developing chick embryo, it is possible to bring together well-established embryological manipulations with genetic manipulations, such as mis- and overexpression of genes and gene inactivation. Importantly, such manipulations can be precisely targeted in time and space to dissect out the individual functions of these signals that play multiple roles during closely spaced time points of eye development. We have previously identified members of the Bone morphogenetic Protein- (BMP) and Fibroblast Growth Factor- (FGF) family as important signals being involved in NR and RPE development, respectively. For example, application of FGF8-soaked beads during early stages of chick eye development respecifies the single layered pigmented RPE to develop into a second multilayered NR. In contrast, ectopic BMP-application induces the presumptive NR to develop into RPE.

Identifying the cellular and molecular mechanisms that act endogenously in eye formation will significantly increase our understanding of vertebrate embryology in general and of eye development in particular, as these key extracellular signaling factors may be used to direct human embryonic stem cell differentiation into RPE and NR. These results potentially provide the basis for the development of novel therapeutical ap-proaches for the treatment of major blinding diseases, such as retinitis pigmentosa, aged-related macular degeneration and diabetic retinopathy.

We are interested in understanding the celluar and molecular signals that direct growth and patterning of the vertebrate limb. Initially the limb forms through the continued proliferation of the body wall mesenchyme at the level of the future fore- and hindlimb region. The mesenchyme then induces the overlying ectoderm to thicken to form a specialised epithelial structure at the tip of the bud, the so called apical ectodermal ridge (AER). The chick wing then continues to grow and eventually develops into a humerus, radius, ulna and digit2 and the posterior digits 3 and 4.

Our laboratory is interested in finding out the mechanisms that ensure that the structures of the limb, such as bones and muscles, develop in their proper positions. For example, how is it that a thumb develops at one edge of our hand and a little finger at the other. We have been involved in the identification of signalling molecules that are important regulators during vertebrate limb development. Interestingly, some of the genes already identified are responsible for limb defects in human patients or are involved in formation of tumours. Currently, we are trying to elucidate possible functions of the cholinergic system during cartilage, bone and muscle formation in the limb (see Layer, 1990; Alber et al., 1994) by carrying out gain- and loss-of-function studies in the chick and analysing single and double knock-out mutants in mice. The discovery of developmentally important genes may suggest new approaches to repair and regenerate limb tissues.